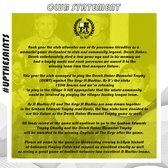 Each year the club allocates one of its preseason friendlies as a memorial game dedicated to club and community legend, Derek Stokes.
Derek unfortunately died a few years ago and in his memory we had a trophy made and each preseason we award it to the winning team from that marquee fixture.

This year the club arranged to play the Derek Stokes Memorial Trophy (DSMT) against The Keys St Martins.
As it’s the clubs 125th Season and we’re returning to play in the village it felt appropriate that the whole community could be involved by playing the villages Sunday League team.

As St Martins FC and The Keys St Martins are now drawn together in the Graham Edwards Trophy semi-finals, the two clubs have decided to use this fixture as the Derek Stokes Memorial Trophy game as well.

All funds raised at the game will continue to go to the Graham Edwards Trophy Charity and the Derek Stokes Memorial Trophy will be awarded to the winning Captain at The Keys after the game.

Please all come to the game on Wednesday evening 6:30pm kick-off at Gobowen Playing Fields and support an excellent charity as well as seeing a great game of football between two excellent St Martins teams.